An employee was trapped in the bulldozer in Wisconsin at the Hi-Crush sand mine. When the employee was operating the bulldozer, it became submerged in the pond at the sand mine early morning Monday, May 21st, 2018.  According to the Leader-Telegram reports. Law requirement officers, rescue divers, firemen, paramedics, and other crisis emergency workers reacted rapidly to the 911 call that came in at 7:53 a.m, arriving at the worksite shortly thereafter. 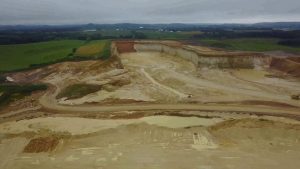 Emergency rescue operations required the use of a water craft to reach the worker still trapped inside the stricken Dozer. Rescuers in the boat quickly pull the worker from the dozer and evacuated him to safety. In addition to this, Trempealeau sheriff also reported that there are several firefighters also faced some small injuries during the whole rescue operation. They were all subsequently released after treatment in the hospital.

The injured worker’s identity was not being yet released by the sheriff’s office as the investigation is taking place. No further information was able to be obtained regarding the actual cause of the incident or whether it involved simple human error.

As a result of incidents and accidents of this nature. Questions are raised, that need to be answered quickly. As they not only do they put the lives of workers in danger but also those of the rescue personnel who attends. It is difficult to assume what the reasons behind the accident were, or how serious this may have become. It is time for all companies to make workplace safety the number one priority over profits. In this case, it may be as simple as not receiving proper advice from industry safety experts.

In today age of advanced technology, why does this still happen?

“Training is always to considered the optimum way to prevent incidents of this type. Although, it must be stated that fatigue and work pressures will often be a contributing factor incident like this”. “So we need to take advantage of technologies that will alert vehicle and machinery operators of known site dangers. Including those safety aspects offered by GPS tracking and GEOfencing of dangerous or hazardous areas like DozerSafe and Trackalert”

When quizzing him as to why if preventative measures were available, why are they not in use in the mainstream. “Maybe its just simple as a lack of education or understanding of the technology on offer, or could be that the companies that offer these products haven’t reached the required audience.” Mr, Shultz replied